College of Agricultural & Environmental Sciences > Uncategorized > MaK-CAES in partnership with KOICA sets up an Ultra-Modern Computerized Horticultural Production System for tomatoes without using soil at MUARIK.

MaK-CAES in partnership with KOICA sets up an Ultra-Modern Computerized Horticultural Production System for tomatoes without using soil at MUARIK. 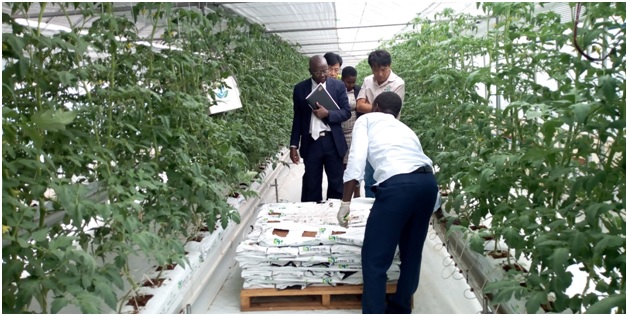 Makerere University College of Agricultural and Environmental Sciences (CAES) in partnership with the Korea International Cooperation Agency (KOICA) has set up a technology on the automation of the green house and growing of crops without using soil. The medium of growth is cock pit imported from Srilinka. Alternatively, sand or sterilized soils can be used instead of the cockpit.

The demonstration set up at Makererere University Agricultural Research Institute Kabanyolo (MUARIK) is using a technology called hydroponics and then smart greenhouse system which can automatically regulate the growing conditions for the plants.

The hydroponic system is comprised of the irrigation machines connected to nutrient tanks and water reservoir tanks. So the machines helps to mix the water and nutrients according to the requirements of tomatoes.

This technology comes with a number of advantages over the conventional outdoor farming. The farm is growing one of the indeterminate variety of tomatoes called Nimonetha from Israel. Other indeterminate varieties that can be grown under screen houses are Anna and Eve F1 locally available in Uganda.

Indeterminate tomato varieties keep on flowering and forming auxiliary shoots as long as they are provided with the required conditions. They can be harvested for over 8 months and hence suitable for green house production system.

In Uganda, the common practice is the growing of tomatoes outdoor/fields. Under the outdoor or open field practice, determinate tomato varieties such as MT56, Tengeru, Eden 600 are grown. These varieties naturally grow, flower and when  the terminal shoot turns to a flower to bear fruits, the plant eventually dries off.

An agronomist from Shinhan A-Tech Co. Samson Byamukama is also managing a parrallel demonstration field of outdoor production system where determinate local variety MT56 has been grown not on soil but cock pit.

PapiusTumusingize, an Agricultural expert undertook a two years’ practical experience under the MaK-KOICA program in South Korea and is now the in charge of the smart green houses. Under the student exchange program, Papius acquired a Master of Science in Agricultural Convergence Technology majoring in Hydroponics and Smart Green Houses.

Besides the advantage of production under controlled environmental conditions for   investment, Tumusingise said that each plant is expected to yield a minimum of 25 kilograms for a period of eight months.

“The main advantage of this system is the efficient use of resources in terms of the fertilizers and water. We get much for the little fertilizers we use meaning, we get higher yields per unit area.

The other very important advantage is that we eliminate the soil borne diseases which are a problem to Uganda tomato production. So, once we grow our tomatoes not in soil, we are 100% sure of the returns, Tumusingise said.

“The idea is to first demonstrate the latest method of horticultural production for purposes of capacity building. In terms of affordability, we want to expose the technology to the farmers and together look for alternatives. Farmers must put in an effort to avoid contaminated soil by sterilization or use other media” Bashaasha stated.

He noted that with this state-of-the- art technology, the disease burden is closed to zero adding that environmentally, and from the cost perspective, this is the way to go because most of the soils are infested.

The Principal further said that the other advantage to the consumer is improved safety consumption in food system because there is no chemical application to the plants in the Smart Greenhouses hence no contamination. Soon, he said clean tomatoes without chemicals from the university farm will hit the market.

Prof. Bashaasha added that as part of the outreach activity, farmers from Namulongeand  Ssese  have been sensitized while early exposure of the technology to the  students from different institutions is being conducted as they come for the tour.

He further reported that the technology has attracted graduate students at Masters level to conduct research. One of them, he said is researching on how much water is needed to produce one kilogram of tomatoes under this technology   while the other is studying the impact of the environment on screen house production.

Makerere  andChonbuk University signed an MoU in May 2016 when the President of Chonbuk  University visited Uganda. The agreement entails academic training, research, staff exchange and outreach.

The project estimated budget was $ 3 million US Dollars. 70% of this budget is funded by the Korean International Cooperation Agency (KOICA) and another 30% by Eagle Vet while  Shinhan A-Tech  is funding 30% of the horticultural enterprise

Under this cooperation, a modern poultry unit was set up at MUARIK with an element of microorganism processing. 13 students from Makerere university also went to Korea for training. The project is also expected to open up a fully-fledged piggery unit at MUARIK.