A study funded by the Government of Uganda through the Makerere University Research and Innovation Fund (Mak-RIF) in the College of Agricultural and Environmental Sciences (CAES) has found that prolonged use of herbal medicines affects body organs.

Researchers recommend that traditional medicines should not be used for more than 14 days. The need for regulation and strengthening quality assurance along the value chain to reduce risks associated with the use of herbal medicines has been emphasized.

This was revealed during the virtual research dissemination workshop of the RIF 1/CAES/025 project titled, “Development of   Safe and Efficacious Anti-Malarial drug from Traditional Medicine (DESAT) on 16th June 2021.

DESAT is an interdisciplinary and multi-institutional research project led by Prof. John Steven Tabuti – an ethnobotanist from Makerere University’s Department of Environmental Management  in the College of Agricultural and Environmental Sciences.

Presenting the project results, the   Principal Investigator   Prof. John Steven Tabuti said the project undertook research in Tororo district and gathered data to determine the commonly used plant material for the treatment  of malaria  and the safety profiles of selected  species.

“We found through this study that the three species that we investigated were reasonably safe to use in a period of 14 days. Beyond 14 days, we have observed some negative impacts on the organs of the animals.

One of the effects was on the kidney, another, was a clot in the stomach, and there was also some ulcers in the stomach, and death of some cells in the liver. This suggests that these traditional herbs are not safe. Some of the results have not yet come back, which should tell us if we should be very conscious. We hear stories of people taking traditional medicines for a long time. They normally get problems with the liver and die.  Another thing which I have to remind you is that the specie which caused liver  damage was Vernomia, you can take as you please, but, you have to be conscious.” The PI cautioned.

Prof. Tabuti reported that people with chronic diseases are taking these concoctions for a long time and they present  signs and symptoms and only to go to the hospital and  are  told their liver is beyond control.

Prof. Tabuti said malaria is still a leading cause of illness and death worldwide with 92% of the cases occurring in Africa and whose management is complicated by the fact that access to medicines is limited in some places with a possibility of treatment resistance.

“There is thus a need to develop new locally efficacious medicines from local materials and this requires that we determine which materials are used, confirm that they are efficacious and are safe to use”, Prof. Tabuti said. 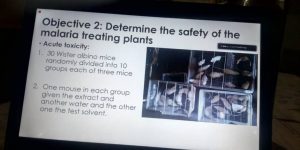 Prof. Tabuti said, the goal of the study was to contribute to the development of a safe and efficacious antimalarial. The   specific goals according to the PI were to compile a list of malaria treatment plants in Tororo district and prioritize them and also determine the safety of  the malaria  treating plants.

The survey and field work he said, was conducted in Tororo district using the questionnaire where 151 respondents were selected for interviews, asked to name species they use and how they are prepared and administered.

Prof. Tabuti reported that 47 species are used to treat malaria in Tororo and 9 were mentioned by majority respondents and, were therefore,  considered the most  culturally efficacious and safe.

Dr. Nabatanzi said to determine the acute toxicity of the malaria treating plants,  30 Wister albino  mice   were randomly divided into 10 groups each of three mice , and one mouse in each group given the extract and another water, and, the other one the test solvent.

She also told participants that each mouse was starved for 24 hours prior to treatment by gavage with  a single doze of dissolved extract of 500 mg/kg.

Dr. Nabatanzi reported that the mice were given food 30 minutes after the gavage, weighed and checked for signs of toxicity daily for 7 days, and a Lethal Dose (LD50) computed and clinical signs noted.

To determine the sub-acute toxicity of the malaria treating plants, Dr. Nabantanzi said, a procedure similar to acute toxicology assay was conducted and the mice were treated twice a week for 4 weeks, each weighed and checked for signs of toxicity daily for 28 days.

“The kidney, liver, heart and stomach issues were examined. Acute toxicity and histopathology assays  were conducted in the Pharmacology laboratory of the College of Veterinary Medicine, Animal Resources and Biosecurity (CoVAB) and the Biochemical parameters (LFTs, RFTs and CBC) were conducted at the Uganda Cancer Institute. 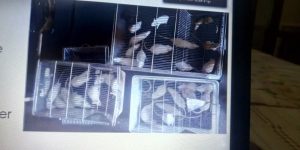 The LD 50 was >5000mg/kg. The clinical observations after acute toxicity showed that the plants are not toxic. However, the extracts had mild to severe effects on the stomach and liver.” Dr. Nabatanzi reported.

Dr. Patience from the National Drug Authority defined herbal medicine product as a finished, labelled herbal medicine product that contains active ingredients aerial or underground parts of plants, or other plant materials, or a combination whether in a crude state or as plant portions and which may contain conventional excipients in addition to active ingredients and may also contain tradition, natural organic or non-organic ingredients which are not of plant origin.

“This medicines may take the form of crude drugs such as tinctures, teas, powders and other herbal formulations.

If correctly applied they can contribute to preventing diseases, maintaining wellness in addition to complementing  convention care for chronic and acute health conditions ,” He said

He said patients commonly use herbal products alone or concomitantly with conventional medicines and that the general public considers them to be safe and relevant source of health care.

“This emphasizes the need for regulation and strengthening quality assurance along the value chain to reduce risks associated with their use.” He added. 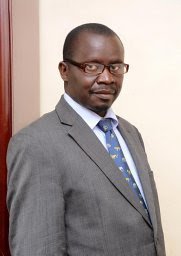 Closing the workshop the Vice Chancellor Busitema University Prof. Paul Waako noted that Traditional medicines are widely used and no doubt they will continue to be used.

He however, observed that the biggest challenge is evidence of safety and efficacy and thanked the university scientists for sharing this information.

“I want to thank your team for sharing the data because I know they are so many researchers working on traditional medicine who do not share the data the way you have shared. And even when they share, the names are coded in interest of intellectual property.

I hope everybody has been able to contribute freely.  I heard the opportunity to listen to the conversation and I found them really informative and useful and I hope that this will make a way forward for the project in as far as possible”, Prof. Waako commended.

Prof. Waako  hailed the research team for the  inter-disciplinarity  and  working with different organizations.

Citing the  Uganda coffee scenario of exporting coffee beans, Prof. Waako challenged  people who are working on natural products not to fall in that trap. Right now we lack the technology but I want to assure you that I have strong suspicion that if you have a crude extract which has malaria efficacy and you don’t go an extra mile to find out the actual compound, somebody will buy that crude extract from you and they identify the malaria product and sell it back to Uganda.

Prof. Waako applauded Makerere University Management   and the research team for being able to secure resources to support projects of this nature noting that it has not been easy to get resources for research in traditional medicines

He implored researchers and universities to mobilize more resources and invest in the infrastructure required to develop herbal medicines into final compounds to protect the intellectual property.