Women make up half of the Agricultural workforce of Africa and historically, women issues have not been well incorporated into agricultural sciences and development. Considering details of women’s’ life and the youth might have a huge impact on the outcome of agricultural research projects and whether the technologies and varieties developed are accepted or fail on the farm.

Gender is being recognized as critical component of global agricultural development. Makerere University Gender-Responsive Researchers Equipped for Agricultural Transformation (GREAT) project in collaboration with USAID Feed the Future  Innovation Lab for Peanut has conducted  a  gender awareness training for students and scientist working on Ground nut projects in Sub-Saharan Africa to explore how gender can impact the objective data that comes from their research.

It was attended by 19 participants including Co-PIs and students working on the Feed The Future Innovation Lab projects in four countries-Uganda, Kenya, Malawi, Zambia, and Mozambique.

The University of Georgia, College of Agricultural and Environmental Sciences (CAES) is the lead entity that won the bid for the Feed the Future Innovation Lab for Peanut under the leadership of Professor David Hoisington.

The Lab works to alleviate hunger by helping farmers in developing countries grow and profit from healthy peanut crops. The new program builds on the many successes of the previous Peanut & Mycotoxin Innovation Lab in developing new varieties, pre- and post-harvest management and processing.

The Feed the Future Innovation Lab for Peanut also works in the new research areas of peanut-based nutrition, gender and youth. to develop a better understanding of the roles gender and youth play in peanut value chains in each target country based on scientific studies, and examples of gender-sensitive research products having impacts.

During the course, Makerere University’s GREAT Principal Investigator Assoc. Prof. Margaret Najjingo Mangheni said the participants comprised teams of researchers from the USA, Universities and research organizations from Sub-Saharan Africa. From Makerere university, the training was attended by   Professors, lecturers and graduate students from the School of Public Health, School of Agricultural Sciences, and the School of Food Technology Nutrition and Bio-Engineering

“It has been an inter disciplinary set up and these scientists are researching on plant breeding, food safety, technology and nutrition. So we are giving them a sensitization so that they are able to be aware of how gender matters in their research programs”, Assoc. Prof. Mangheni said.

She said as facilitators, the GREAT team has learnt that the content developed from the GREAT mainstream course aimed at skills development can be tailored to different audiences.

“I have learnt how to facilitate an inter-generational learning and setting. I have really learnt how to make gender concepts simple and understandable to participants seeing gender for the first time, and also to the younger, and older people like professors.”.

Dr. Mangheni advised participants to be proactive in reaching out for information and networks that can support the application of what they have learnt.

“…Making the lead to application and transformation of research so that research is gender responsive requires you to be engaged in a continuous learning process and as scientists, go out and look for information because you are an information age. Network and interact with other scientists in the scientific community, apply what you have learnt and keep in touch with us the trainers at Makerere and partners in Cornell university”, Dr. Mangheni advised. 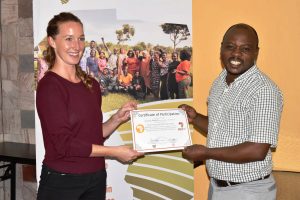 The representative for the Peanut Innovation Lab Post-doctoral fellow from University Georgia USA Dr. Jessica Marter Kenyon said the Feed the Future Innovation Lab for Peanut is part of U.S. Government’s strategy to fight hunger and poverty around the world. According to Dr. Kenyon, the Peanut Innovation Lab is mainly focused on improving the productivity and livelihoods of peanut farmers in Sub Saharan Africa including Uganda, Senegal, Ghana, and Kenya.

“In Uganda we are supporting projects focused along the peanut industry and in this training, we are addressing questions from the broad research areas of: Gender and youth, Nutrition to varietal improvement, and the gains along the entire value chain”. She said.

She said that although women and youth constitute majority of the populations in SSA, researchers tend to focus on male led households while doing household surveys, yet men do not have the same experiences and perspectives as women do, hence the lack of focus and inclusion of women in men’s’ issues in agricultural development worldwide.

Recognizing that gender really matters in science and development, and that it is not a field most people have been trained in, Dr. Jessica Marter Kenyon said they wanted to offer students and scientists in the Peanut Innovation Lab an opportunity to attend this workshop and sensitize them why gender matters in lives, at workplaces and specifically why gender issues matter for agricultural research particularly surrounding groundnut agriculture.

As a facilitator, Dr. Jessica Marter Kenyon said, one of the key take away from this workshop was the importance of considering men in a research system, to engage men scientists, male farmers and restoring women liberation in agricultural development and development in general.

“I was a little bit nervous when I first came because gender is something that often make people uncomfortable because there is an idea that women empowerment while addressing gender issues excludes men.

So one thing I was really happy to see that came out of this workshop was the recognition of our participants that gender is both men and women, it is both feminine and masculine and that gender is about how human beings relate to one another and the way society has constructed certain rules and responsibilities for men and women.

Another thing we worried about was that gender studies and gender research is a social science concept and we were concerned that our physical scientists spend a lot of time working with plants or soils or seeds and won’t be receptive to qualitative research or mixed method research and questions that social science researchers ask. I was really very happy to see that all our physical scientists were extremely engaged in this topic.

In her key message to the participants Dr. Jessica Marter Kenyon said researchers cannot contribute to agriculture development or agricultural research and science well unless gender is put into consideration.

Changing gender inequities or addressing gender inequalities in agriculture or in any sphere of human activities according to Dr. Jessica Marter Kenyon involves broad structural changes.

“… And so it is unlikely that we are going to see much improvement in the current gender inequalities in Africa unless we think about the deep seeded structural issues like why aren’t men more involved in reproductive responsibilities, unpaid care work in households and our laws and policies that are respective of women and their needs.”

A Senior Research Officer working with NARO and PI of the Peanut Innovation Lab projects in Uganda Dr. Kalule Okello David said, the training has been a learning curve in that it was a second time he appeared as a trainer.

Dr. Kalule reported that although there was resistance with questions like how the training applies to different projects with a thinking that the course applies to social scientists at the beginning of the training, the curriculum was tailored to fit their different fields by giving relevant examples.

“They were able to grasp the concepts and the last day today seeing them give testimonies of the changes in their thoughts and the way they are going to change their projects made us say actually learning can happen across all board so long as you use the language they understand”.

As plant breeders Dr. Kalule said, they used also to believe that gender does not apply so much to them but to social side which is no longer the case, considering  the entire chain and appreciation that breeders  don’t live in an island but are surrounded by many people, professions, disciplines, the social side and even within the hardcore physical science there is a lot of heterogeneity.

“So if one looks at breeding, we are answering to a clientele out there which is diverse, which does not speak the language of breeders. So thinking that who else is missing in my team to be communicated to the breeding output, that is when we realize that for you to communicate to  the  farmers, you need to realize the dynamics they are in, social setting, the decision making, stresses they go through so that is when you find that the issue of who decides, what to and when to grow comes in play, why is your variety adopted or not . 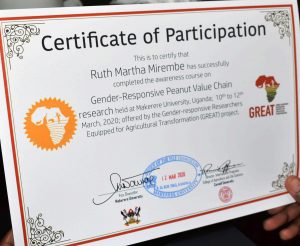 So, for me appreciating that there are lots of other disciplines, cultural norms and values   which affect acceptance or development of a variety meant that I make sure that nowadays I incorporate gender and I bring many disciplines on board from the starting point up to the end, which makes the entire system gender responsive”. He said

In his Key message to participants. Dr. Kalule described the training as a gender awareness training to be followed by more in-depth training into nitty gritties of gender that will make participants much more equipped than what it is now.

“Gender is dynamic, gender is a tasking role and communicating gender needs a lot of sensitivity and application of gender in our research projects need to be phasewise. And if for me I got trained about two years ago but right now I am a trainer, that means, changing the mindset and being flexible to accept other people’s views into this will enable research go on.”. He said.

Status of Ground nuts in Uganda

The ground nut according to Dr. Kalule is the second most important legume crop in Uganda after the common beans and is fast commercializing in the chain. It used to be a subsistence crop managed by the females but of late, it is becoming much more commercial with a kilogram costing twice that of beans and seeing a shift of men coming into production as well.

Dr. Kalule explained that the crop has a lot of issues and problems which affects the yield and mode of production and lots of tragedy effects.

From literature culturally men own the land. And, since groundnut is largely managed by women, the issues of how to reduce drudgery, how to apportion land to be planted by who and the contribution by women come into play.

In Peanut Innovation lab project, social economists rank traits needed in a variety and ask farmers, processors and consumers what characters they need in a varietal ground nut.

Besides varietal development, the project has an aspect of capacity building putting a lot of emphasis on female students to be on board to join the science and scientists from the US side and Ugandan scientists as co-advisors, co -researchers to co-mentor as a cross cutting project.  Dr. Kalule explained