About 40  livestock farmers from ten cattle corridor districts in Central and Western Uganda have been retooled on pasture production and management to enhance their capacity to improve animal nutrition, farm yields and profits.

Pastures are the cheapest source of feed for livestock and are mostly made up of grasses and legumes with high levels of required nutrients that are needed by animals for quick maturity, increased production, good health and quality products.

The farmers attended lessons at Makerere University Agricultural Research Institute Kabanyolo (MUARIK) and conducted practical sessions at Robran Holdings Limited (RHL), in Buwanuka Wakiso district. The trained farmers are expected to go out and train fellow farmers in their respective districts on how produce and manage pasture for supplementary feeding.

The training was organized under the Promote Supplementary Feeding (SUPPL-F) project. The SUPPL-F project is part of the Developing a Market –Oriented and Environmentally Sustainable Beef Meat Industry in Uganda (MOBIP) which is a Government of Uganda program supported by the European Union (EU) under the overall  supervision of the Ministry of Agriculture, Animal Industry and Fisheries (MAAIF).

The project is implemented by the Private Sector Foundation Uganda (PSFU) and partners at a total budget of EUR 715,299 for a period of 28 months from the 12th August 2019 to December 2021. The partners include Robran Holdings Limited (RHL), Makerere University College of Agricultural and Environmental Sciences (CAES), The Green Elephant (TGE), the Livestock Development Forum (LDF) and the Orchid House Farm Nakasongola.

“Improved animal disease and parasite control, good breeding programmes and good livestock husbandry are important but, the farmers’ emphasis should be placed on good proper feeding, which in turn will make the other things possible.

Pastures are the cheapest source of feed for ruminant animals which are particularly valuable because of their ability to convert all types of forages, roughages and crop by-products into products which are useful to man i.e. milk, meat, hides and skins etc. Therefore, ruminant livestock production can be increased through increasing the productivity of already existing resources or through the introduction of new resources”, The PI said.

Prof. Mpairwe said, animal feeding is one of the fundamental importance in livestock production.  He explained that, the basic requirements that are fulfilled when animals are fed are maintenance (growth), reproduction and production stressing that the potential of the animal in meeting each of those objectives will depend on how well the animal is fed.

Prof. Mpairwe said grasses form the dominant pasture component and are characterized by their ability to produce a lot of seeds and ability to propagate themselves vegetatively. He however observed that grasses mature very rapidly and loose quality as rapidly.

“Uganda has six dominant types of natural grasslands, which are adapted to the specific agro-ecological zones. This is mostly determined by amount of rainfall received and soil fertility condition.

“Think of the grasses as your crop, while you use animals to harvest. Many farms are not making profits because of poor nutrition to animals leading to less yield, with the use of quality pastures, you can increase yields on your farm, fattening animals faster and maximize profits,” Mr. Natwijuka said.

Natwijuka said over the years, research has been made and new pastures and management systems have been developed to handle challenges mostly lack of enough feeds for animals during dry seasons and improving production by providing the required nutrients.

He said, there is need for farmers to produce and manage pasture for animal production because they have high ability to colonize the places where they are grown and posses high levels of required nutrients that are needed by animals for quick maturity, increased production, good health and quality products.

“They have high regeneration potential (after grazing), improve soil fertility by nitrogen fixation. Some are drought resistant solving the biggest problem of lack of enough feeds during dry seasons. They can easily be ensiled and stored for future use. They are highly palatable and value can easily be added by processing them into feeds”, Natwijuka explained. Mr. Natwijuka advised farmers to venture into pasture production as a business.

“You can make money through pasture seed and planting material production. Through hay production (this is the cutting and drying highly nutritious grass and store for long time feeding). Through silage production (this is fermenting of fresh grass for easy storage and improve the nutrition value”, He advised.

He said farmers can venture into production and management of the different types of pasture which include grasses, legumes, shrubs and trees adding that each, has different biomass and nutrition content. 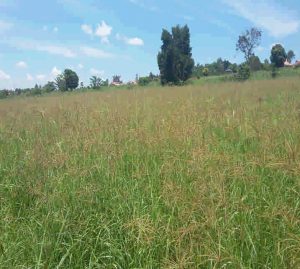