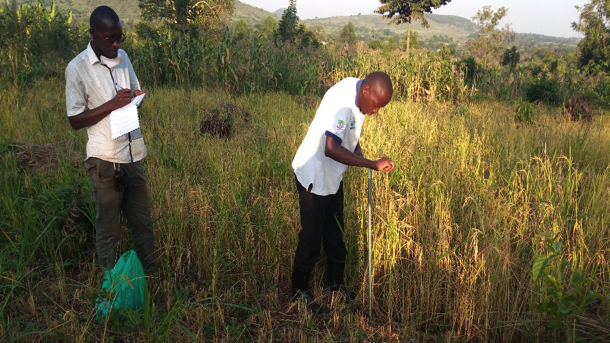 Maize and upland rice are very important to Uganda’s agricultural sector. The two crops are grown by many smallholder farmers in the country for both food security and income, especially in Bunyoro region. Over the last two decades, the total production of Maize and rice has gradually increased. For instance in 2014, Food and Agriculture Organization (FAO) reported that the quantity of rice produced in Uganda increased by 26% from 1997 to 2007. Similarly, total maize production in the country increased from roughly 800,000 tons in 2000 to 2,575,000 tons in 2019. This trend in production is explained more by the steady expansion in acreage cultivated than from increased productivity per acre.

Low productivity is an established and well documented challenge facing Uganda’s agricultural sector. This is mainly because most soils on which the crops are grown have declined greatly in fertility but also due to low fertilizer usage, pests and diseases and other production constraints. There is also reported evidence of changing climate which further negatively affects maize and rice production.

To address the issue of low yields due to low soil fertility, the government of Uganda through Makerere University Research Innovations Fund (MAK – RIF) funded a project ‘Upgrading interim fertilizer recommendations of priority crops for increased agricultural productivity in Uganda’. The project focused mainly on conducting a rapid soil testing and plant tissue analysis study of the two crops in Bunyoro region. To carry out the study, two main soil types in Bunyoro on which maize and upland rice are grown were identified. The soil types included the Ferralsol in Hoima district and a Regosol in Kikuube district. Ferralsol are soils that are generally very old soils (highly weathered) with low cation exchangeable capacity, high kaolinite and high Fe and Al oxides while Regosol are weakly developed mineral soils in unconsolidated materials. These are dominated by stones and the parent material still undergoing weathering. The high stone content is also characteristic of high iron levels.

The findings from the study were shared with the stakeholders in a dissemination meeting that was held on the 27th August, 2021 at Buhimba Subcounty Community Hall in Kikuube district. The audience comprise of upland rice farmers, maize farmers and extension staff of Kikuube and Hoima districts. In the meeting, Dr. Patrick Musinguzi, who is the Principal Investigator, informed stakeholders that maize and upland rice needed different fertilizer rates despite having similar soil tests results on each of the soils. The soil results showed that both Ferralsol and Regosol had insufficient amounts of phosphorus, potassium and Zinc but significant level of iron (Fe) contents was observed. The rice and maize samples showed a similar trend of nutrient content with strikingly low levels of zinc. In order to sustain production of maize and upland rice, the study proposed some interim fertilizer application rates that farmers can use. These were computed from the soil tests and plant tissue test that were conducted.

Dr. Patrick Musinguzi however cautioned that the high market prices of fertilizers might make it hard for farmers to use the proposed rates unless an appropriate policy action is put in place to guide on fertilizer access and usage. Farmers were also advised to use the fertilizer carefully to minimize losses. It was further stressed that these fertilizer combinations can be expensive but adoptable if more proper fertilizer use sensitization programs are promoted in the area. Dr Musinguzi also demonstrated that the rice crop was more profitable than the maize crop and farmers should have keen interest in enhancing rice production in the region. He also advised farmers to adopt ‘Ekibaaro concept in farming’ that literally means ‘calculating costs’ to maximize profit but also make correct decisions for the right enterprises.

Mr. Kiiza John, who is a rice farmer in Kikuube district, emphasized the need to work together as a group to advance the agenda of embracing fertilizer use for higher rice yields. Similarly, Mr. Onyuta David Alinaitwe (Agricultural officer, Kabwooya Subcounty, Kikuube District) cautioned the farmers on the bad practice of burning organic materials in fields. He advised the audience to desist the practice that destroys the soil organic carbon which is a fundamental soil property for sustainable crop production.

In conclusion, Mr. Mulindwa Sulayiman – representative of the District Agricultural Officer of Kikuube District noted that the project is like an X – ray that has been able to establish the main limiting factor of soil productivity in the region and noted the need to do agriculture by computing cost of inputs. He further emphasized that the government should ensure that deliberate efforts are put on fertilizer subsides and low-cost irrigation technologies to respond to climate challenges. In addition, Mr. Barongo Vincent – Agricultural Officer Hoima district emphasized that rice production is a key enterprise which can only be sustained by proper application of fertilizers since the soils are low in fertility. He advised farmers to keep records for both maize and rice production since many times farmers are not aware of the heavy costs of production, He also thanked Dr. Patrick Musinguzi and MAK-RIF team for setting up a good package that is critical for guiding production in the region. The meeting was finally closed with a group photo.