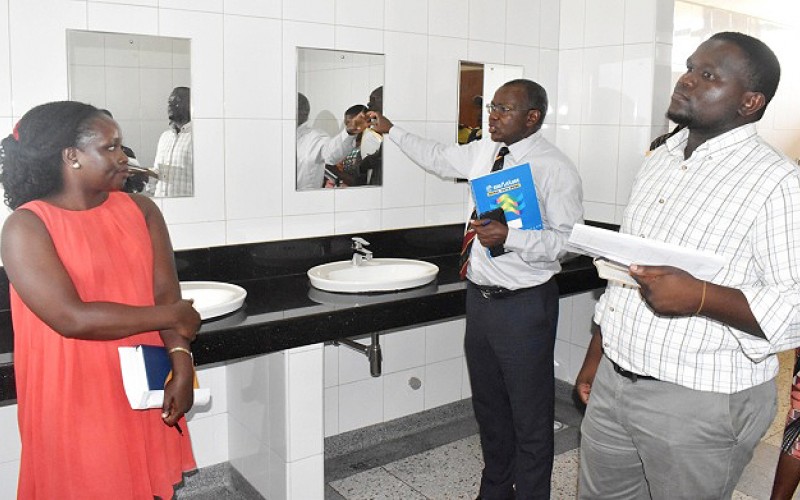 Makerere University College of Agricultural and Environmental Sciences (CAES) has received the state-of-the-art Graduate Training and Research Laboratory facility from the contractor under the African Development Bank (AfDB)-HEST project. The single-storied facility estimated to have cost US$1.2million houses research laboratories, a library, offices, training rooms and other amenities.

Speaking on behalf of the Project Manager, Eng. Florence Lunyoro said they were handing over the initial facility that took roughly 12 months from start to completion. The site at MUARIK was handed over to Excel Construction Company Ltd on 10th August, 2017.

“It has four laboratories, three training rooms, offices and scenery facilities. The structure is designed such that you can have extensions done for future use. It has its own sewerage treatment plant and refuse collection from waste water,” Lunyoro explained.

Lunyoro hailed the funders and Makerere University for being supportive saying, the project has been a good one without challenges. She expressed willingness to work with the university on other projects.

“The construction works were done to the standard required. We have inspected the labs, lecture rooms, the toilets and other facilities and they are up to standard. I think the contractor did a good job,” the Principal noted.

He appreciated that the furnishings had delayed but added that the college would provide temporary facilities so that graduate students start having classes in the structure.

Bashaasha also appreciated the library space, which he said the college would furnish.

“We intend to make it the first National Agricultural Library in the country by seeking support from both NARO and Makerere University.”

The Principal also said the structure has good facilities to anchor the university’s research and outreach.

“We have Biotechnology, Animal science, Soil science and Crop science laboratories and once we get the lab equipment that we need to get them fully functional, they will be some of the best laboratories in the country. This will go a long way in strengthening our research capacity and capability to contribute to the national goals of Agriculture”, He added.

The Principal thanked the Government of Uganda and the Ministry of Education and Sports for financing the project. He also extended his appreciation to the Vice Chancellor and the entire Makerere University Management team of for the support, pledging to put the facility to good use.

Makerere University was among Uganda’s Public Universities and the biggest beneficiary of the African Development Bank (AfDB)-HEST  5 year (2013-2018) government-secured loan. US$29.2 million was allocated to Makerere University.

The project was approved in 2013 with the coordinating Unit in the Ministry of Education and Sports. The Ministry’s mode of operation was that there must be one contractor to handle all constructions in one institution.

Excel Construction Company Ltd. signed a contract on 16th December, 2015 to handle constructions at Makerere University effective 1st February, 2016.  They had an 18-month contract to complete construction of all the structures in the university.

The contractor phased the construction for easier management of the resources and started the civil works with the Central Teaching Facilities 1 and 2 next at the College of Humanities and Social Sciences (CHUSS0 and the College of Business and Management Sciences (CoBAMS) respectively.

The other project component was the renovation of nine laboratories (one in each college) and equiping lecture rooms and laboratories with modern instruction facilities. Two CAES laboratories (Biotechnology and East lab) were renovated in the second phase (July-December, 2016).

The rehabilitation of the MUARIK Dairy Unit was fronted as a university project. The idea was that MUAIRIK Dairy Value Chain will generate money for the University and incubate students. The unit was handed over on 22nd April 2016. The rehabilitation works for the Milking parlour, and Feed mill commenced in May 2016 and the facilities were made available for full operation in December 2016.

And finally, the initial building at MUARIK comprising Graduate Training and Research Laboratories has been handed over to the university.