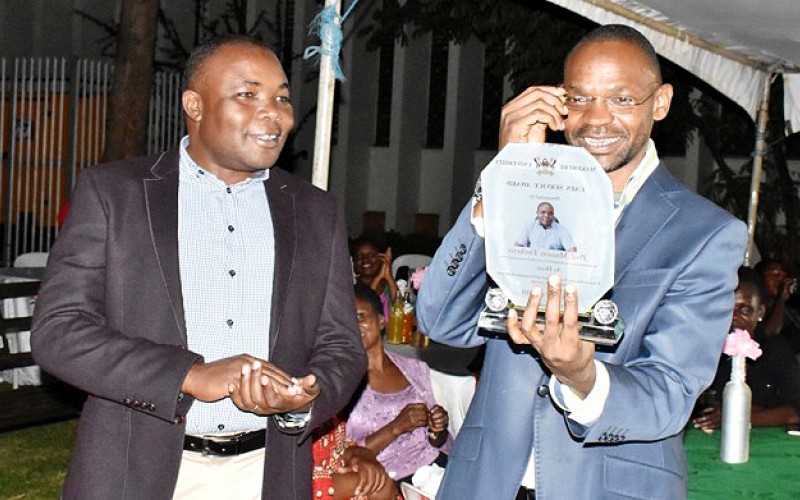 Three professors in the College of Agricultural and Environmental Sciences (CAES), Makerere University were on Friday, 14th December 2018 honored for their distinguished service offered to Makerere University after serving in leadership positions for many years.

Prof. Mnason Tweheyo and Prof. John Muyonga were recognized for serving as Deans for the past 8 years since the university turned collegiate in 2011 in the School of Forestry, Environmental and Geographical Sciences and the School of Food Technology, Nutrition and Bioengineering respectively.

The ceremony held at the Forestry Gardens Quadrangle was presided over by the First Deputy Vice Chancellor in charge of Academic Affairs (DVCAA) Dr. Umar Kakumba.

Dr. Kakumba hailed the Principal CAES, Prof. Bernard Bashaasha for the spirit of recognizing colleagues for their services and instituting a culture of togetherness.

“I understand the importance of building human enterprise to be motivated. It is not about working and making money all the time because as humans you reach a saturation point where you need to relax. Such events build cohesion, understanding and appreciation for one another”, Dr. Kakumba said.

The DVCAA congratulated the outgoing leaders for their contributions to the nation and Makerere University.

Dr. Kakumba appreciated the great work done by Prof. Muyonga, saying that as first Deans of their respective Schools, they were both involved in pertinent negotiations during the constitution of the collegiate system.

“Prof. Muyonga has done great to commercialize the School of Food Technology, Nutrition and Bio engineering as well as promoting agro-processing at the Food Technology and Business Incubation Centre.” Kakumba said.

Kakumba described Prof. Tweheyo as a colleague they studied with at the undergraduate level who grew very fast through academic ranks and also a contemporary with whom they came into leadership.

“The School of Forestry has expanded and has done a lot in entrepreneurship and building programs in terms of protecting natural resources, adding value and making them more important to the nation.

Under Prof. Tweheyo’s leadership the school has played a great role in helping the nation to take care of the environment. He has positioned and positively transformed human resources in different aspects like climate change.” The DVCAA acknowledged.

Dr. Kakumba also thanked Prof. Tukamuhabwa for leading MUARIK for four years and face-lifting it to an admirable institute not only in research but also other mandates like production and outreach.

He recognized CAES as one of the strongholds who have supported him in terms of sharing knowledge in the Senate with regard to the constitution and creation of colleges.

The DVCAA expressed commitment to support, visit CAES off campus sites for training and to champion the programs that contribute to the vision and mission of Makerere University.

“We should work together not as adversaries. We should not jeopardize each other. We shall support CAES innovations.  You are our flag bearers in research and innovations and the university is aware of that. This is what we need as a university to promote multi-disciplinarity”, he said.

Prof. Bernard Bashaasha thanked the DVCAA for sparing time to attend the function, and all staff for turning up in big numbers saying, the main objective of the ceremony was to say thank you to the outgoing Deans and Director MUARIK.

The second objective according to the Principal was to end the year together as they appreciate the services rendered by colleagues.

“In a special way, I thank the outgoing leaders for their great service to the university. They have served with courage and acted with love, led with respect, integrity and passion.

They have been value adding men and we are proud to have had them and hopefully, we will be guided in their way of management.” Prof. Bashaasha stated.

He advised the new deans to consider themselves as God-given with a major assignment of developing the youth.

He said, although there many demands and expectations, they should not worry about the great things that their predecessors have done but rather identify and run their own race and seek support.

He described CAES as a diverse college made up of three schools and two off campus institutes deriving its strength in that diversity.

He pledged to invite the new DVCAA for a visit to appreciate the college’s opportunities and needs.

Every end of year, the CAES organizes a get together party to appreciate services offered by outgoing or retiring staff. The event also offers the opportunity to staff to have fun and network. Staff are also given Christmas coupons worth UGX 120, 000 as take-home appreciation.