Uganda still ranks one of the leading producers of banana with the East African highland bananas (AAA-EAHB), locally known as Matooke contributing the bulk (Approx. 80%) of total banana production. Matooke is grown by several farmers and is a major source of food and income.   Because of its importance and relevance to the country’s economic development, researchers have gone ahead to develop high value products such as matooke flour, banana chips, banana extruded high energy foods and many other products.  However, in order to achieve sustainable banana production, there is need to continuously establish measures on how soil fertility management can be improved.

It is now increasingly apparent that on-farm productivity of bananas in the region has declined. Several farms report a low average annual yields ranging from 10 to 20 tons/ha/year, which are below the potential yields of about 60 tons/ha/year. The yield gap is attributed to declined soil fertility, climate change effects, pests and diseases. The low soil fertility is mainly associated to nutrient mining, leaching, soil erosion, and inherent poor chemical nature of most soils.  Mulching, which is a traditional practice for soil water conservation and soil organic matter improvement in banana is very expensive for most farmers due to limited access to the materials. The organic materials in the form of animal manure is equally not easily accessible. The use of mineral fertilizer is still very low in the banana cropping systems. As a result, soil fertility decline has now increasingly become a challenge and threat to sustainable banana productivity.

Through the Government of Uganda-Makerere University Research and Innovation Fund (MAK-RIF), a project was funded to undertake research titled “Upgrading interim fertilizer recommendations in priority crops for improved agricultural productivity in Uganda”. The project focused on rapid soil testing and plant tissue analysis of major crops in Uganda, that is, maize, upland rice, lowland rice and banana. For the Banana crop, the project embarked on the on soil and plant testing with the ultimate goal of developing interim (provisional) fertilizer rates for banana production. The team was led by Dr. Patrick Musinguzi as the Principal Investigator (PI) together with co-PIs who included Prof. Jackline Bonabana, Dr. Crammer K. Kaizzi, Dr. Emmanuel Opolot and Dr. Peter Ebanyat.

Three districts were selected in the central region (L. Victoria Crescent) for the study.   These included Wakiso, Buikwe and Mukono. A total of 26 banana fields with Mpologoma variety were randomly selected targeting two main soil types. A total of 15 fields were from Mukono and Buikwe (predominantly Luvisols) while 11 were from Wakiso districts (mainly on Ferralsols). 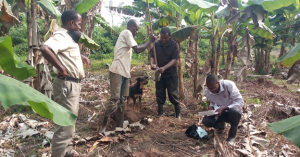 From each of the selected banana farmer field, one composite soil sample was collected. In addition, composite samples of fingers, leaves and pseudostems were also collected. The samples were processed and analyzed in the Makerere University Soil and Plant Analytical Laboratory. Overall, the Luvisols in Mukono and Buikwe districts were moderately acidic, with low levels of available Phosphorus (P), exchangeable Potassium (K) and soil organic Carbon. The same soil fertility conditions were observed in the soils from Wakiso. However, the soils contained tolerable levels of micronutrients for manganese (Mn), zinc (Zn), and iron (Fe).  Some fields had moderate soil organic carbon levels an indicator of some attempts of farmers to use organic materials. The plant samples had low levels of total P and total N, but moderate levels of P, Mn, Fe and Zn. The findings on soil and plants suggest that need for farmers to use right fertilizer package by applying them in right amounts, with the right type, well placed on the crop and applied at the right timing for efficient nutrient utilization.

The findings were shared with stakeholders in a dissemination meeting on the 23rd August, 2021 at Nakisunga sub-county council hall, in Mukono district. The audience was made up of the banana farmers, the media team of NBS and Bukedde TVs, technical staff of Mukono, Buikwe and Wakiso districts. The meeting was also attended by Prof. Julius Zaake, who is one of the experienced researchers on Banana production in the central region.

In the presentation of the results, the lead Principal Investigator, Dr. Patrick Musinguzi emphasized that soil organic carbon levels across most fields were very low and need boosting by increasing application of organic materials. Cognizant of the high volumes needed and the difficulty in sourcing mulches, he urged farmers to explore ways of improving production and access to organic wastes. On the low levels of nutrients from laboratory tests, he advised farmers to adopt an integrated approach by using both organic and inorganic sources. Dr Musinguzi also advised farmers to adopt all measures that can increase the supply of organic materials in the home gardens inform of biomass accumulation or animal manure generation. This, he noted that it has to be deliberate effort among the banana farmers if they are to maximise banana production in the region.

In his presentation, Dr Musinguzi indicated that research findings suggest that provisional fertilizer rates for Banana are 556 kg Urea (260 kg N); 300-400 kg DAP (60 kg- 80 P kg P) and 390-860 MOP (190-430 kg K) kg per hectare per year. He noted that the rates vary depend on soil tests, and indicated that low nutrient levels may require amounts for application. For new banana fields, the farmers were advised  to apply fertilizers in three splits in ratio of N: P: K, that is 1:2:1 (1/4 N, 2/4 P, ¼ K) with P at the planting stage): 2:1:1 (2/4N, 1/4 P, 1/4K) with more N at vegetative stage); and 1:1:2 (1/4, ¼, 2/4 more K at flowering), with more K. For the existing banana field, the old experienced farmers were advised to apply 260 kg N + 60 kg P + 260 kg K with more use potassium use since it has been identified as most limiting nutrient for banana. Overall, the nutrient application plan includes advise on the use of organic materials so that SOC is restored in the banana production system. The research also observed that farmers should keep record of all production costs but also shift from selling unweighed bunches of banana but adopted weighing in the market to minimize losses but maximize profits. The findings from the study recommend that field based trials be conducted on these provisional fertilizer rates so that valid recommendation are established.

In response, the farmers generally expressed concerns on the costs of fertilizers to meet the required provisional rates. Mr. Sabavuma, a banana farmer from Nakisunga village, had this to say, “To protect our banana crop, the government needs to come in and reduce fertilizer costs so that farmers can afford to use of some of the provisional rates. Even the animal manure we used to get easily has also become hard and expensive to find”.

In addition, Mr. Sekabira Elijah, who is also a farmer, appealed to all banana farmers to positively look at using fertilizers since that is one of the main ways to increase yields.

Prof. Julius Zake informed the audience that some soil nutrients are natural elements that exist in the rocks, but have become available through weathering process for the plants, like banana to absorb and utilize them. He added that nutrients cannot be made but rather have to be sourced from elsewhere and applied. The sources can be either manufactured substances like inorganic fertilizer or organic materials. He noted that commercial agriculture involves selling large quantities of produce to near and far markets, and most of these crop products carry with them nutrients. Continuous harvesting without addition of nutrient is one of the lead cause of soil fertility decline.

Prof. Zake, told the audience that heavy textured soils can make it hard for banana roots to penetrate and breathe so they can take up the nutrients. Eventually, the roots come up on the surface which makes the banana plant susceptible to wind fall.  Therefore, it is important that the soil is pulverized during establishment of banana plantation in order to increase on pore spaces but also to allow easy root establishment. Prof Zake cautioned farmers that over application of fertilizers can be disastrous to the environment if mismanaged. Some of the nutrients get washed to the streams through leaching and run off while others can vaporize into the atmosphere. Farmers need to be environmentally sound so that the right amount of fertilizers is applied at the right time and from the right source with proper placement.

In conclusion, Mr. SSebwalidda Peter, on behalf of the technical staff of Mukono district thanked MAK-RIF for holding the dissemination of results together with farmers so that they really know the collective effort needed to improve the soil fertility condition. The agricultural officer noted that the gap between the soil researchers and the district extension staff needs to not only be bridged but also strengthened. The participants agreed to continue being ambassadors in promoting proper fertilizer use. They also urged the Government of Uganda to establish a National Soils Program to address issues of soil fertility, fertilizer use and fertilizer packaging in the current efforts to supply seeds, banana suckers or tissue culture plantlets so that sustainable  productivity is achieved. The Representative of the District Agricultural Officer Mukono, Ms Proscovia Zalwango closed the dissemination meeting.