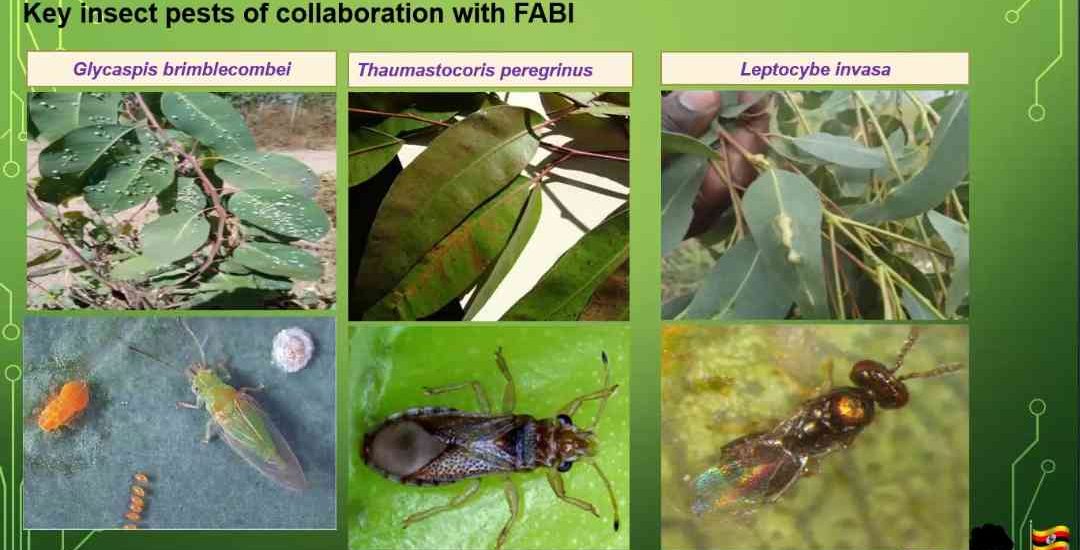 Agriculture is the backbone of Uganda’s economy, employing about 73% of the population and contributing approximately 20% of the country’s Gross Domestic Product (GDP) and 48% export earnings. The National Development Plan (NDP III) identifies agriculture as one of the key growth opportunities with the highest potential to generate employment and have positive multiplier effects on other sectors. The Agricultural sector contributes about 50% of the gross domestic product (GDP) of most countries in Africa, and plays a pivotal role in ensuring food security across the globe. The sector is however derailed by a number of factors. Key among these are pathogens that are greatly undermining crop production in the country and Africa in general.

On 8th-9th November 2021, the Department of Agricultural Production, College of Agricultural and Environmental Sciences (CAES), Makerere University in partnership with the University of Pretoria, South Africa held a research dissemination workshop at Golf Course Hotel, Kampala to deliberate on a number of issues affecting the sector. Convened by Dr Nicholas Kagimu under the theme “The Impact of Pathogens on Agricultural Production”, the workshop was part of the activities under the Future Africa’s Early Career Research Leader Fellowship (ECRLF) programme at the University of Pretoria intended build a critical mass of the next generation researchers in Africa. It drew participants from academic and research institutions across Africa.

In their discussions, the researchers highlighted the different challenges affecting agriculture across Africa and the extent of the damage caused by pathogens to plants and humanity. Besides other challenges, the researchers noted that pathogens were causing a serious economic threat, calling for various interventions to eliminate them.

Addressing participants, the Commissioner, Crop Inspection and Certification at the Ministry of Agriculture, Animal Industry and Fisheries, Mr Paul Mwambu revealed that pathogens were some of the major factors causing the stagnated growth of the agricultural sector. “Plant pathogens can be devastating and have far-reaching effects like human diseases. The late blight pathogen (Phytophthora infestans) introduced into Ireland from Central America in 1845 resulted almost in total failure of the potato crop leading to death of more than 2 million people and migration of many others. The chestnut blight (Endothia parasitica) was introduced into the US on the nursery stocks imported from the Orient about 1906 and within 25 years; the American chestnut tree was almost exterminated causing an estimated loss of over 1billion US dollars. In Uganda, the coffee wilt disease of 1991 caused a 58 million USD loss, the Banana bacterial wilt of 2001 led to the loss of 360 million USD, the Maize lethal necrosis of 2012 caused a loss of 180 million USD, the Fall army worm of 2016 caused a loss of 5.5 million USD and the False codling moth caused loss of about 1.2 million USD in exports per year. These major pest and disease outbreaks over the years have created shocks at local and national level that have eroded resilience of farming systems stagnating agricultural growth in the last decade,” he noted.

Highlighting the need to urgently address the challenge of pathogens, the Commissioner explained that it is a sovereign right of every country under the IPPC & SPS-agreements to utilize phytosanitary measures based on both scientific & economic evidence to regulate the entry of plants and plant products and other materials capable of harbouring plant pests. “It is not un-common these days to see people chant Slogans like “Black lives matter” when you tune in to international media like CNN, BBC and FOX-news. It is now almost un-ethical for one to start a football match without bending a knee in recognition of the “Black Lives Matter movement” fighting racial injustice in America and around the world. In similar regard, Plant lives matter too. The right to protect plant resources (National and international) should never be taken for granted or compromised because when plant lives fail, human and animal lives fail too. During the covid-19 pandemic for example, it has been agriculture that has sustained livelihoods through sufficient production and supply of food during the lockdowns,” he explained.

The Commissioner noted that there was need for more research into plant pests to curb resurgence of secondary pests. He called for more use of bio-pesticides as opposed to conventional synthetic pesticides noting that the latter are harmful to human health, detrimental to the environment and biodiversity, and lead to rapid build-up of resistance in the target pests and pathogens causing number of diseases endemic across crops and geographic regions.

In his remarks, the Director Future Africa, University of Pretoria, Prof. Cheikh Mbow said Africa was losing 20% to 30% agricultural production per year due to pathogens. “Understanding how to manage pathogens and setting regulations to control them is critical in the advancement of food security in Africa,” he noted. Prof. Mbow implored researchers to think about the most appropriate technologies for controlling pathogens, indicating that the use of pesticides was a serious environmental challenge. He appreciated the conveners of the conference noting that it would largely contribute the vision of Future Africa to connect scientists from different fields to exchange ideas on how to develop new research projects specifically aimed at addressing the challenges that hamper transformation in Africa. Emphasizing the importance of multi-disciplinarity in addressing challenges affecting Africa, Prof. Mbow. urged participants to explore the various opportunities for collaboration at Future Africa Institute. In this regard, Ms. Agil Katumanyane briefed participants about the research collaboration opportunities at Future Africa.

Representing the Principal, CAES, the Dean, School of Agricultural Sciences, Dr John Baptist Tumuhairwe said pathogens were a serious threat to agricultural production, causing extinction of various crops in Africa. “Pathogens do not recognise borders. The is need for serious research into pathogens and the control measures,” he said. Dr Tumuhairwe acknowledged the great work being done by Future Africa to advance research in Africa.

Delivering a presentation on the status of nematology research in Uganda, Dr Herbert Talwana, an associate professor in the Department of Agricultural Production at CAES, Makerere University, called for more funding towards research on nematodes, re-echoing that if not controlled, they can have very devastating effects on the economy. “Nematodes manifest in different types and some are more severe. There is need for intensive research on nematodes to inform the different control measures,” he explained.

Presenting an overview of Entomopathogenic Nematodes (EPNS) in Africa, Prof. Solveig Haukeland said there was need for more studies on the latter, specifically about mass production of indigenous nematodes and the application methods. Similarly, Prof. Antoinette Malan from Stellenbosch University emphasized the need for more research into EPNs to make them commercially viable.

In his presentation on “Forest pest surveillance to protect Africa’s forest resource”, Prof. Brett Hurley noted that a wide range of pests and diseases had been introduced in Africa from different countries and these were greatly affecting forest cover and leading to economic losses. He said forest pest surveillance was key to informing forest management responses and called for more collaboration amongst African countries to minimize the challenges. “It is important for all of us to learn about the pests in various countries because it is a matter of time before they migrate to other areas,” he advised.

Presenting his research on “Bioprospecting of the Natural Products from Xenorhabdus and Photorhabdus bacteria and their application in agriculture” Dr Nicholas Kagimu said there was need for mass production of entomopathogenic nematodes to control pathogens on a large scale. Entomopathogenic nematodes are insect killing worms that have proved to have great potential in the biological management of many agricultural pests. Dr Kagimu extended appreciation to Future Africa for availing a platform for African researchers to jointly address challenges affecting the continent.

In her remarks, the Head, Department of Agricultural Production at CAES, Dr Mildred Ochwo appreciated Dr Kagimu for effectively representing the Department and Makerere University in general at Future Africa.

The workshop was moderated by Dr Sadat Walusimbi and Dr Denis Mpairwe, members of staff in the Department of Agricultural Production, CAES.

The ECRLF aims to develop research leadership for the African Bioeconomy. Capacity in this focus area is crucial to help address Africa’s most urgent challenges and opportunities for sustainable and inclusive development.

The fellowship has unique elements that focus on both technical research and leadership skills development. It aims to support the development of the research base at the fellows’ institutions, and build a longer-term collaboration to develop sustainable and high potential research programmes. This will help to bridge the chasm between the completion of a Ph.D. and having an established research programme. The ultimate goal of the fellowship is not only to produce excellent science, but to support the development of new centres of research excellence in Africa.