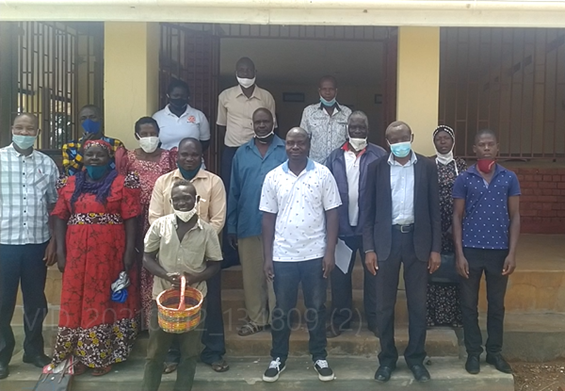 Namutumba is found in the eastern region, about 170 Km from the capital city-Kampala. The district terrain is made up of numerous wetland soils (Gleysols – wet soils with good SOC retention and redoximorphic features) that makes lowland rice a major crop enterprise. However, the marketable rice volumes are low because of poor land productivity. In most rice fields, the average yield is 1.7 tons/ha which is far below the potential yield of 6 tons/ha.

Seventeen (17) lowland rice fields across the district were selected for the study. In each field, one composite soil and plant sample was collected, and analyzed in the Soil and Plant Analytical Laboratory in order to determine current nutrient contents and concentrations.  The findings are that Gleysols in Namutumba district contain some iron, manganese, moderate levels of SOC, Nitrogen but notably deficient in Phosphorus, Potassium and Zinc. On the other hand, rice plant samples contained low amounts of nitrogen, phosphorus and Potassium thus a need for measures to improve nutrient uptake.

The impact of findings was shared with the stakeholders in a dissemination meeting on the 12th August, 2021 at Nsinze sub-county council hall. The audience was made up of the low land rice farmers and technical staff of the district.

Dr. Patrick Musinguzi, who is the Principal Investigator, stressed that the low available phosphorus, potassium and zinc levels coupled with high demand in rice plants which suggested the urgent need to adjust the fertilizer blends and rates to suit the crop and ensure  sustainable production of low land rice.

Photo 5: Dr.  Patrick Musinguzi making a presentation of the findings to the stakeholders

According to the available data, Dr Musinguzi advised farmers to apply provisional fertilizer rates to supply Nitrogen, Phosphorus and Potassium and Zn. The provisional rates for lowland rice were reported to be in the range of 139-205 Kg/ha Urea (eq. 64-94 kg N/ha); 60-175 kg/ha DAP (eq.12-34 kg P/ha) and 180-542 kg/ha MOP (eq. 90-271 kg K/ha). In addition, the needed rates for zinc fertilizers are 3-28 kg/ha Zinc Sulphate. He however cautioned that the high market prices of fertilizers might render hard for farmers to use the proposed rates unless an appropriate policy action is put in place. Farmer were also advised to use the fertilizer carefully to minimize loss but also maximize their impact on rice production since they are expensive. For instance, one hectare needs about 2.5 bags of 50kgs of Urea which cost UGX.287,000 (as of August 2021). This in addition to other nutrients such as phosphorus – supplied from Triple or Single Super Phosphate that cost about UGX 190,000-200,000/= per 50  bag while DAP is about  UGX 120,-000/ per 50 kg bag; and Potassium with Muriate of Potash about UGX 140,000 kg/50 kg bag. These fertilizer combinations can be the expensive for farmers unless policy interventions and proper fertilizer use sensitization programs are promoted to support agricultural productivity.

The stakeholders confirmed that the needed fertilizer rates were too high to be affordable and called for government to subsidize the fertilizer costs. Byakatonda Stephen, a progressive farmer in Nsinze sub-county expressed concerns that exisiting fertilizer shops were already hard to reach due to the  high costs.

In their remarks, technical staff stressed the need for more training on soil specific fertilizer optimization approaches. They also observed that it is time for Uganda to establish a National Soils Program/Initiative just like there is good emphasis on Water for Irrigation so as to sensitize farmers on soil management. Mr. Musingi James, the Agriculture Officer of the sub-county urged the research project to include developing a quick tool to use in calculating field specific nutrient demands.  Mr. Donald Kayuza, the Agricultural Officer of Mazuba sub-county advised farmers to embrace fertilizer use in the proper way (right type, right amount, right timing and placement) to achieve maximum benefits of high returns from the high yields. With gratitude, Mr. Isiko Jafali, who is the Agriculture Officer of Magada Sub-county, thanked MaK-RIF for considering Namutumba district as a study area in such a great research. 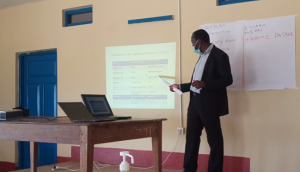 Patrick Musinguzi making a presentation of the findings to the stakeholders

In conclusion, Dr. Patrick Musinguzi added that proposed fertilizer rates still need to undergo field response trials to establish lowland rice response to the provisional rates and develop validated recommendations in the Gleysols (wet soils with good SOC retention and redoximorphic features). He encouraged stakeholders to have special interest in funding research in fertilizer and soil management to boost crop productivity. He reminded stakeholders to continue being ambassadors to advocate for a National Soils Program so that issues of soil management and fertilizer use are given attention to boost crop production and income of millions of smallholder farmers.

For details, email at musipato7@gmail.com