Prof. Noble Banadda has been laid to rest at his ancestral home at Lukooge Sempa, Luweero . 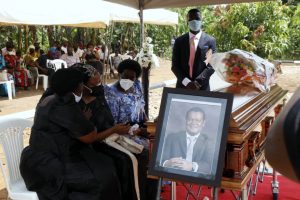 Banadda succumbed to COVID -19 on 1st July, 2021 in a Kampla hospital. The celebrated professor was buried on Sunday 4th July 2021 and his funeral service relayed to hundreds of mourners within Uganda and the diaspora  via zoom.

Pastor George described the demise of Prof. Banadda as a great loss to the academia, the country, the church and family. He  however said, death is not an end, imploring  the aggrieved to hold onto Jesus Christ , who conquered death, the only comforter and one that will come to judge the living and the dead.

He said the law demands that we die, had it not been for the messiah as written in John 3: 15 and that whoever believes in Him shall have eternal life.

Paying their last respects to fallen professor, mourners described Banadda as  not just an  ordinary professor, but  a researcher, innovator, generous, a wonderful friend, humble, , dependable and dedicated worker, a legend and true genius of the times.

Speaking on behalf of Makerere University, the Dean School of Food Technology, Nutrition and Bioengineering Dr. Abel Atukwase conveyed apologies on behalf of the Principal and Vice Chancellor  who were not able to make it due to earlier scheduled  commitments. Dr. Atukwase  delivered a message of condolence from the college and the school saying,  the university had  earlier held a church service on 2nd July 2021 in honor of Prof. Banaddas contribution to the university adding that,  the Vice chancellors  condolence message had been delivered and circulating on  different social media platform.

Dr. Atukwase said the University was greatly saddened by the passing on of Prof. Banadda as a colleague, a mentor and a teacher.

Banadda, the Dean said, joined the university as a part time lecturer in the then department of Food Science and Technology in 2006 and later in 2011 appointed full lecturer and quickly rose and was promoted to full professor under the fast track promotion in 2012 given his robust research profile. “He served diligently as a professor of Agricultural and Bio systems engineering, teaching and conducting research and secondly as the head of department and, by the time of his death, he was left with two months to the end of his second term in August 2021.as head of department.

He served as member of the senate representing the school on different national and international fora. He was a prolific researcher and one who won many accolades that led to the growth of the school.

He pledged that the school and the university will work hard to continue with Prof. Banadda’s legacy of research excellence given that Benadda worked with a strong dedicated team of staff and students.

He encourage the bereaved family with Psalm 18:2 to hold onto the Lord as the fortress and the rock in whom they should take refuge.

The President SDA in Uganda Dr. Matte Daniel told mourners that in the midst of the heavy hearts due to this bereavement, they should turn to Jesus as the only hope in this world.

“We share our heartfelt condolence for the loss of a beloved father, son, dependable worker and very dedicated citizen of Uganda and member of the university and church.

We have been cheated of a humble, passionate, respectful, honest and committed man. Death is evil and cruel and the biggest enemy of human.

Before death we are all vulnerable and helpless. The only logical and sensible lesson is that man needs God”, Dr. Matte stated.

Ernest Rubondo from  the Petroleum Authority of Uganda  said, Banadda was  a very responsible man who served as board member on the technical, governance and audit committee of the oil and gas sector. Rubondo said Banadda was nominated by the president and has been board member that oversees the activities of the authority and supervising the Executive Director and management.

“He gave a lot of advice to the authority, was critical by virtue of being an academician and very inquisitive in the quest to learn. He was full of strength, innovative and a very cheerful and humble person,

His contribution to Uganda’s gas and oil sector specifically to the authorities mandate will be missed’ His commitment has enriched the authority.

The notable aspects during his service include his contribution to the preparation of the country’s report 2020.

He offered technical insights in the development of the state-of- the -art petroleum data center to handle the country’s data and information”, Rubondo remarked.

Rubondo said it will be difficult to replace him in many roles and responsibilities he has been handling adding that, his career growth to full professor at the age of 37  and the Papal Award are significant reflections.

He said God takes good people early and it is only human that the bereaved accepted his death as written in Romans:8:28. “We first met in 1988 at Bugema Secondary School and even when we separated after senior four he kept in touch.  I dropped from the academic line to join business but he inspired me until I went back to school for a bachelor’s degree in economics and later did a masters.

Banadda had a rare trait of trust and commitment. He has served his family, church, community and the nation in different capacities and in Munyonyo where he lived he was engaged in  the welfare of members.  I have lost a friend whom we shared a lot with”, Mayanja said.

Speaking on behalf of the family, Dr. Jimmy Kitumba said they had lost a clan pillar, a brother, friend, a father who was also the heir to his father.

“ I have lost a brother,, a generous, supportive and a uniting factor” Dr.Kitumba said.

Dr. Kitumba thanked Makerere University, the Petroleum Authority of Uganda, the various institituons, friends and relatives for the physical, financial and moral support accorded during  Banaddas hospitalization  and clearance of the medical bills. 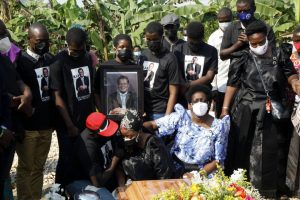 In their tribute read for them, the children described their father as  papa who was loving , caring and one that was very much interested in knowing what they would like to become in future.

“..Father was away and very hard working man and loved the family. He always asked us what we want to be and told us to look at him as an example. He told us that life is full of challenges but it is fair if you attain an education. Now, it is us to write a chapter in our lives.

My mother is special and hardworking and she has never got enough sleep. This time, she is going to  be working very hard and alone  for our life” Parts of the childrens’ tribute read. May 2021, three days of getting the second jab on 26th May 2021 and started complaining of a sore throat, body weakness, sweating and breathing problems that led to his hospitalisation  in the ICU unit at Case hospital where he battled the disease for about four weeks till 1st July when he passed on.

Mrs. Banadda thanked all for standing by the family during the difficult times.

He provided for everything. Everything I wanted, he would provide more. I don’t know where to go from here being that he has been everything. You let me fly and then my wings are cut, I don’t know.

Noble I really thank you for everything you did. I really hope and pray that God receives you in his boardroom and hope you can rest in real peace”, Dr. Beatrice Banadda bid farewell to her husband.

May the Almighty God strengthen Beatrice, children and entire family.